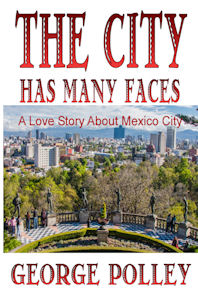 Sapporo-based author George Polley has just released a new book set in Mexico City called “The City Has Many Faces”. Polley moved to Sapporo in 2008 with his wife, a native of Kushiro. He has written short stories and poetry for many years.

The City Has Many Faces was inspired by Polley’s own visit to Mexico City. “Being in Mexico City was overpowering, and I fell immediately in love with it,” Polley said in one of a few interviews over the course of the last year. He shares this excerpt from the opening of the book:

In the middle of the night you can feel it, a deep-down throbbing that comes from somewhere beneath the city, like a heartbeat. Ba-thump! Ba-thump! Ba-thump! Day and night, twenty-four hours a day, three hundred and sixty-five days a year, the city is alive and moving. Along nearby Calle Rio Tiber with its unbelievable traffic jams, it is worse. It’s said that six blocks away in the middle of the night you can hear its traffic roaring, horns blaring, someone tooting “La Marseillaise” over and over and over again. Mexico City is alive, and it is awake. Does it ever sleep? Anyone you ask will tell you that it does not.

After returning to the states, Polley took a lunch with man from Mexico City. He shared his experiences from the trip. The man asked “How many years did you live there?” Polley replied, “Oh, a little over two months!”

“I had fallen head-over-heels in love with the city, and it showed,” Polley said. “I literally soaked it up as a wandered around, rode buses and subways, roamed museums, sat in cafes, got lost, found my way home using my plano seccionado (sectional map, a tattered old thing that sits on my desk, got lost again…”

To date, Polley’s most popular book has been “The Old Man &  The Monkey,” a story of a relationship that develops between a man and a snow monkey, serving, as the notes on the back of the book describe, as a “moving allegory of dignity in the face of racism.”

Themes of compassion and gratitude are common in Polley’s work. On his website, he describes this in more detail:

In all my living and all my studies I have asked this question; “What is it that makes living sing?” The answer, simply put, is compassion and gratitude; it is these that connect us to all that is. Leave them out and life begins very quickly to fall apart. As a writer of fiction and poetry these are foundational, though I must admit that they appeared first in my poetry. Then I wrote the story about an old man and a monkey and everything changed, not just for the old man and his wife, but for everyone in their tiny village, and for me. …

Below are some more excerpts form my interviews with Polley, covering past and future books and his life in Sapporo.

On his upcoming book, “Seiji”

“Seiji” is a novel about a Tokyo artist who, as an eight-year-old boy survived the Tokyo firebombing of March, 1945. Badly burned and orphaned, he is sent to an orphanage, where a US serviceman, Sgt. David Sakamoto meets him when he visits the orphanage to discover what they need. Being an artist, he’s crammed his knapsack with drawing supplies, which he distributes to the children. Noticing that Seiji has an exceptional talent for drawing, he begins working with him and some of the other children. The novel opens when his foster father Kazuaki Ito, an established artist that David Sakamoto had met, encourages Seiji to put his pain on paper, to draw it, which he does. This leads back to the horrific memories Seiji carries within him, memories that as an eleven year old boy he pours out in ink and color. Much later, he becomes an established artist and gallery owner in Asakusa (on Nakamise street).

The novel began as a short story that I submitted for possible in “A Rainbow Collection: New Asian Short Stories” that Professor Mohammad A. Quayum of the International Islamic University in Kuala Lumpur was editing. Amazing to me, out of 150 entries, it was one of twenty-five that were selected. Why write a novel about him? There is much more to his story to be told.

On his book “Bear”

“Bear” is a story about a ten-year-old Seattle boy named Andy Lindquist and his very unusual dog named Bear. Bear is unusual in the sense that he looks so much like a brown bear that people are afraid of him until they get to know him. Andy and Bear are inseparable. Bear is a great listener, has a sense of humor, loves everyone except bullies and other mean people, is somewhat of a trickster, solves the mystery of a giant brown rat infestation in the neighborhood, and annoys an annoying talk show host named Denny Best because Bear ignores him. Bear is a great one for smooches, too, standing-on-his-hind-legs-bear-hug smooches, which is very much like a bear. The only one of a litter of golden retriever pups that looks like a bear, his origin is a bit of a mystery.

On what he likes about life in Sapporo

I like the weather, the people, the ambiance of the city, the ease with which my wife and I can move about the city using public transportation, the scenery. What’s not to like? I love this place.

View Polley’s website for more information on his work.