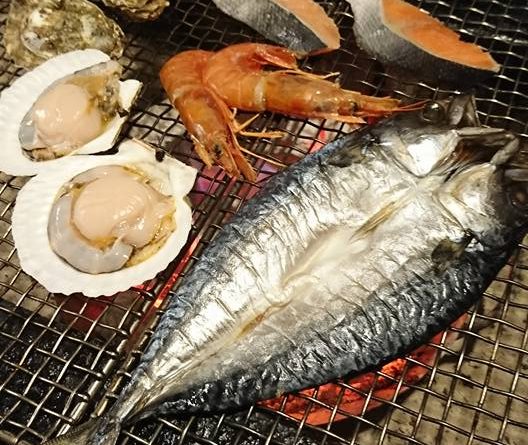 We visited the birthplace of Robata-yaki, Kushiro City located in Eastern Hokkaido.
*Literally “fireside-cooking”, often shortened to just Robata (ろばた in hiragana), refers to a method of cooking, similar to barbecue, in which items of food are slow-grilled over hot charcoal.
*wikipedia

I’ve spoken with many people regarding the origins of the term Robata-yaki. Many of the locals in Kushiro say that it was a term coined in Kushiro city. The style is undisputedly from Hokkaido. Years ago a large hearth with a grill was used inside of a house as both a source of heat and as a cooktop. Hokkaido fishermen also needed a way to cook on boats safely. The charcoal was encased in a stone box in the middle of the ship.
As to the origins of the name. Many years ago the Hokkaido government made a campaign to attract people to Hokkaido’s rustic life style. The image depicting cooking on a large hearth was very popular. The first Robata-yaki restaurant opened in Sendai, and it was called “Robata”. Nowadays there are thousands of these restaurants all over Japan. The fishing city of Kushiro is especially famous.

We visited a local favourite 炉ばた煉瓦 Robata-yaki Renga located close to downtown. Fantastic food, people and service. You must come on by if you’re in Kushiro. The seafood was exceptional. Their company is also famous for Salmon and Salmon roe Ikura. The Ikura-don ( marinated roe on a bed of rice ) was delicious!