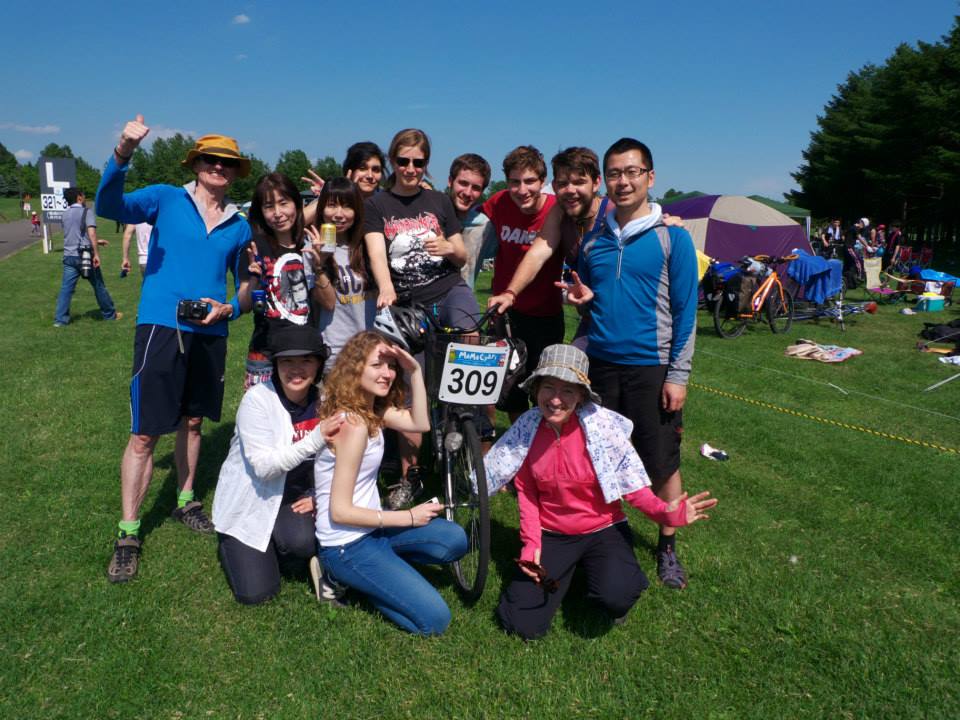 Have you heard of the Hokkaido Mama Cyari Race? The name in Japanese is ママチャリ耐久リ大会２０１３. A mama cyari (chari) is a typical Japanese shopping basket bicycle; they are made for shopping and getting around town, not racing. But in recognition of their usefulness and popularity, they are celebrated humorously, and by some very seriously in the annual Hokkaido Mama Cyari Race.

It’s a popular team relay held in Moerenuma Park, with four hours to race around a 3.5 km circuit as many times as possible. There were over 300 teams competing and there can be up to 10 people in a team, which means there are a lot of people participating. There are also plenty of people  there to support their friends and enjoy the lively atmosphere.  Last year we raced in cold relentless rain, but this year on June 23 we raced in glorious sunshine, I definitely prefer the sunny version.

There is a side competition for the best dressed team which encourages people to race in crazy outfits. There were plenty of people dressed up creatively for the occasion; we saw cartoon characters, animals, zombies and many other creative outfits.  This year the winners were wearing massive cardboard and papier mâché Mickey Mouse faces and ears. I must say riding a mama cyari in that particular outfit looked like hot and precarious work. There were also others there to seriously compete for the race title wearing Lycra and perhaps  more suited to tour de France.  Despite regulations about what specs a bicycle can have to be accepted as a mama cyari for this race, there were definitely some racy versions pushing the definitions.

Anyway, our social team made up of international students and outdoor club members rode a reliable and classic mama cyari. Some of the boys wore a cat costume for fun, but after 2 laps it was discarded because it was dripping with sweat! We had entered to have a good time together rather than win anything, but as we recorded each lap time, we found ourselves trying to beat previous personal times. One teammate even wiped out on a sharp corner in the effort, but heroically continued the race with blood dripping down his leg! There was a really positive energy created by everyone trying to do their best for themselves and the team. We had a wonderful time and many fond memories were made. Last year I said I wouldn’t put myself through it again, this year I’m making no promises for next year, but that said I could find myself registering again on the event site: http://www.mmcyari.com/

Haidee Thomson is a New Zealander who has called Sapporo home for the last 2 years. In between teaching English and researching English teaching methods, she is an all-season commuter cyclist and outdoor enthusiast. Together with her partner Rob Thomson, she enjoys cycling and camping trips, hiking mountains and exploring the many special places Hokkaido has to offer.