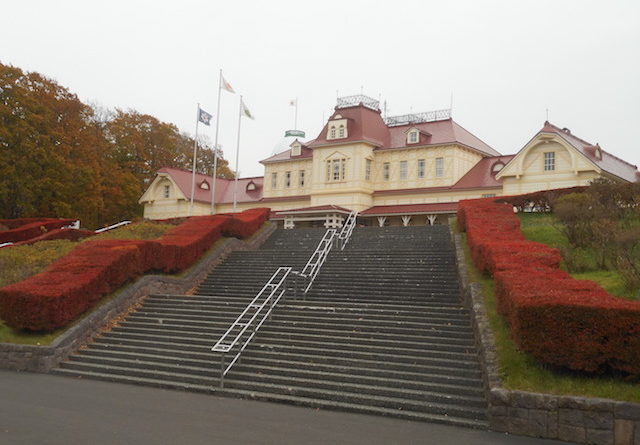 On the outskirts of Sapporo going east toward Ebetsu is the Hokkaido Historical Village, known more commonly as Kaitaku no Mura. Opened in 1983, the village is part of the Nopporo Shinrin National Park and takes up 54 hectares. The vision for Kaitaku no Mura was to preserve buildings from Hokkaido’s frontier period (the late Meiji period though early Showa). On site there are close to 60 buildings from all over island that represent the earlier days when Japanese development of Hokkaido had begun. The village is made up of four sections. Entry to the village is through the entrance plaza, one of the largest buildings on site, and originally the Sapporo Railway Station. Exiting through the back you enter the first section, the town section, with two dozen old shops and town houses arranged along a main street with shops to the front and old homes behind them. This is also where you can catch the horse-drawn trolley to other parts of the park. At the end of the second town block to the left and bordering a small lake is the fishing village. Here buildings from the once great herring industry can be found. To the other side of the park, following the trolley track you will come to the farm village. Buildings here include farmhouses, storehouses, and the like, but one of the more intriguing buildings is the silkworm house, where silkworks were raised for the making of kimono. After the farm area, the fourth and final area is the mountain village. Following the road here will take you back into the town area and the exit. The area Kaitaku no Mura occupies is large and walking shoes are recommended. And arrival at the park is best done by car, entering the park on Highway 12, and advancing a half mile or so to the entrance to Kaitaku no Mura. Entrance to the village is 800 yen for adults. In a country that knocks down so many historical structures to make way for apartment buildings and parking lots, the Kaitaku no Mura is a rare opportunity to step back in time, one that shouldn’t be missed.